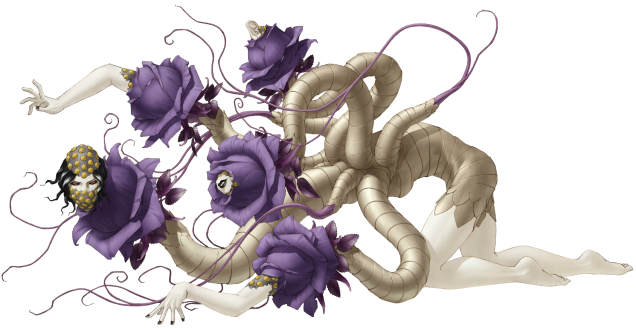 Appearance: The design of the creature, made by Kazuma Kaneko, is truly amazing. A humanoid giant woman is partially fused with floral forms, creating a complex and still gorgeous female creature. The tree-like branches are like tentacles, spreading around flexibly, with purple flowers at the end. While the legs are ordinary pale legs, the other appendixes of Jezebel emerge randomly directly from the flowers, in a chaotic mixture of human and arboreal forms. Also the mouth is separated from the head, and it appears inside another flower, smiling. She is crawling on her knees like begging, or maybe she is unable to walk while sustaining the heaviness of the multiple branches in her upper body. There is something disturbing but beautiful in her design, especially the face, which keep femininity while showing intimidating red eyes.

Background: Her name came from a Phoenician princess from the Bible. She was associated with promiscuity, intrigue and lies. In the Old Testament she is the one responsible for spreading the cult of Baal. The beauty in her design highlights her seducing role, focused on intrigue and lies. The purple flowers are a symbol of danger and poison, since they show the same color of the Nightshade. The poison is a subtle female weapon that was used many times for political homicides, again connected to the biblical Jezebel. In Devil Survivor, Jezebel is a powerful demon that resides inside the main body of one of the main characters. The fight against her is tough and complicated. Jezebel is standing in a pool of lava, complicating the attempts to damage her. Moreover, since she is linked with one of the protagonists, hurting the demon will also hurt the character, which could die during the battle.