Appearance: At first glimpse, he could even look like a normal child, a sort of oversized baby Jesus or a giant cherub. Then, his nightmarish profile will become very clear in all the sick details. The giant baby is blindfolded, and looks like that he is constantly crying tears of blood, flowing down under the bandage in red rivers. Exposito wears on his head a big wicked crown, a very clear symbol of Catholicism, and a close recall to the figure of baby Jesus. The baby is held by a wicker woman, a colossal figure missing detailed traits, holding the baby like a maternal shadow. During the battle in the game and also in the last released concept art, a  snake-like creature extended itself from the main body of the wicker woman, like a sort of appendage. While the wicker woman simply moves around, and the baby only tries to catch and dismember whoever can perceive, the snake creature is attacking and protecting the baby with a multitude of skills. It is interesting to notice that, especially in the concept art, the face of the snake is like the one of a sad woman, probably representing the deceased mother of Exposito, which still tries to protect him.

Background: Exposito is really the embodiment of whatever could be interpreted as creepy or scary inside catholic art. The holiness fades because of the disturbing details of this figure, which clearly express the contrast between holy and profane. The complex creature is also a sort of unholy trinity, composed by 3 wicked creatures: the mother (instead of the father), the son is clearly there, and let’s suppose that the snake is a sort of holy spirit. However, the story of Exposito is provided directly by the game itself, and it is really a sad one. Just as introduction, the name Exposito is used  in Spain for orphan children with unknown parents. Exposito was a child, when the Inquisition burned his mother for heresy. The child was blindfolded to avoid to see the horrible scene but, even blindfolded, the poor kid was continuously crying. The last wish of the mother, while burning on the pyre, was that the people build a wicker figure in her image, to hold and to comfort her baby for when she will be dead. The Miracle, an energy mutating and twisting religious events in the land of Custodia, saw this scene and granted the wish, creating Exposito. The giant baby and the wicker woman are the perfect representation of the dualism between mother and son, even if in this case it is twisted with sadness and horror.

Regarding the fight itself and the attacks, the snake-like creature will do most of the job. The monster can attack with its own body, or can spit  poison or fire bullets. The creature will move following complex patterns, making really difficult to fight while avoiding its body. The giant baby will instead target specific regions of the arena. If the main character will be unlucky enough to finish in one of those areas, the giant baby will instantly kill him, brutally dismembering his body.

Second issue of “Characters, Diaries and Stories”, a collection of fan-fiction stories regarding peculiar RPG characters of my own invention written as tales, but based on the action of the actual character and together with screenshots (the previous story set in the world of Fallout 4 can be found HERE). I would like to promote in these articles the connection between character creation, fictional tales and free roaming games. In this issue I will tell the story of Elaiza, a soul able to travel between memories, dreams and nightmares. This character was created using the powerful character creator of Code Vein, an interesting dark Soul-like RPG released in September 2019. To tell Elaiza’s story, I will re-imagine the world of Code Vein as an irrational nightmare, which could be anyway not so far from the reality of the game.

Elaiza at the time was a young girl living with her tribe in a very unwelcoming and cold land. The ice and the snow were constantly shattering the environment, and the people were hiding in the ruins of a forgotten society in order to find ephemeral warm. Regardless of her young age, Elaiza was going in expeditions to collect burnable objects for the tribe, helping them to build bonfires to survive the cold night. It was during one of her expeditions that Elaiza embraced the cold death. She saw a rare medicinal plant on a cliff, something very important for her tribe, which could save many lives with its healing properties. At this point, the gears of a tragic machinery were already in motion. The wrong step, the unforgiving ice, and Elaiza was falling down the cliff. After her disappearance, the tribes searched for her everywhere, but when they finally found Elaiza, she was dead. 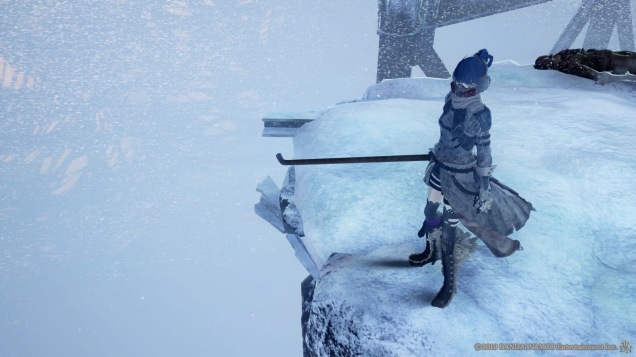 Destroyed for the grief and the sadness, for the tragic death of such a beautiful and lively flower, Elaiza’s parents decided to break one of the most ancient taboo of the tribe, contacting the exiled Dollmaker. The old man was a powerful shaman, able to infuse young deceased souls inside the artificial bodies that he created. He was exiled from the tribe, because his practices were considered forbidden magic, but for Elaiza’s parents that was the only chance to see their daughter again. The Dollmaker was able to help them. He created a beautiful doll based on the exact image of their deceased daughter. Chants, smoke, fire and ancient magic, the ingredients to alter the natural laws, to bind a deceased soul to an inanimate object. The mysteries of the universe are infinite, and the ritual worked. The doll started to move, and she was able to recognise her parents. But there was a grievous secret that nobody was aware of, that Elaiza didn’t die for the fall, but after hours of freezing in the cold. Unable to move, with her bones broken, Elaiza suffered the deadly embrace of coldness for hours, before to finally die. Even when she came back to life inside the artificial body of the doll, the coldness was always with her.

The doll was able to move and to talk, to experience and to feel. It was a huge success for the Dollmaker and Elaiza’s parents. But the problem of the cold was very serious. Whatever she was doing, that sense of coldness was always there. The fire was just a mite dancing entity. Hot steam was simply cool air. There was nothing warm enough to dispatch that horrible feeling. Day after day, the intense cold feeling was increasing, morphing the new artificial life of Elaiza into a hell of sufferance. One day, the cold was so strong that the glass eyes of her doll body cracked. The coldness got unbearable, and the only relief for the poor Elaiza was to sleep. Only by sleeping, she was feeling warm. She started to sleep more and more, in short but warm comas.

Elaiza’s dreams were not a void emptiness, as it could be expected from a doll, but weird and mystic travels full of life and surprises. Colorful roads lightened by sunrise, dreamlike fragmented landscapes made of floating islands, surreal cities, colossal statues and impossible geometries; Elaiza saw every possible and impossible thing inside the dreams. Her artificial life shifted toward the sleep, having the dream as the only way to experience a life without coldness. Because every new dream was like an unthinkable adventure, a place of mystery and surprises. Not everything was lively and colorful, and for every intense dawn and vivid forest, there was a dark pit, or a cold silence. Dreams and nightmares alternated between each others, like light and darkness, melting in complex and impossible landscapes. Elaiza’s travel in the dreamlike world became more challenging, sometime even dangerous. Pits opening from nowhere, mutable landscapes, sentience crystals and falling objects; many things were dangerous and unstable in this world.

The time was passing, and the doll that once was Elaiza started to spend less and less time in the awake world. The cold and constant embrace of her daily pain couldn’t reach her while sleeping, and her soul was free to explore. Her powers of dream traveller increased, and with time Elaiza realised that she was able to enter inside the dreams of other people. She recognised other members of her tribe, while dreaming about a lost son, a hidden lover, or simply the challenges of the everyday life. The constant cold that was scourging her body while awake, inside the dreams, morphed, taking the shape of a small snowman. The persecution that was depriving Elaiza of a normal life, became in the dreams her closest friend, a small companion that was always standing on her shoulder.

But for Elaiza there was no rest even in the dream world, and the nightmares started to get more frequent. She went too deep into the dream world, and opened a door that brought her too close to the realm of nightmares. If before nightmares were only characterised by hazards or traps, now they were able to give birth to unthinkable monstrosities. One particular nightmare was also quite recurrent, a dangerous and tough land full of violence and deadly monsters. In this horrible nightmare, everybody was preying on each other. Evolved human beings called Revenants were feeding on the humans, using their powers to hunt them down. Nightmares here took the shape of entities called Lost, feral and aggressive creatures attacking whoever in their path. That place was a constant battlefield, and the blood of whoever was the victim was the trophy. Hunter or prey, there was no other way in this world. But the most horrible truth regarding this violent nightmare was that Elaiza got trapped there. No matter how much she tried, there was no way to come back to her cold reality, no way to wake up in her bed with her tribe.  After wandering through hundreds of mesmerising dreams, she was trapped in the worst of the nightmares.

Elaiza could only fight her way to survive in that nightmare. Lost and Revenants attacked from everywhere, horrible bloodthirsty monsters, but she was able to defeat them quite easily.  Somehow, she was draining power from the nightmare itself, absorbing the constituents of this violent reality. Her powers in the dream lands were growing more and more, giving not only the possibility to summon creatures, such as her loyal snowman, or strength, but also altering directly her body. Elaiza was able to modify herself using the essence of the nightmare itself, morphing her artificial body in grotesque creatures or deadly appendages. 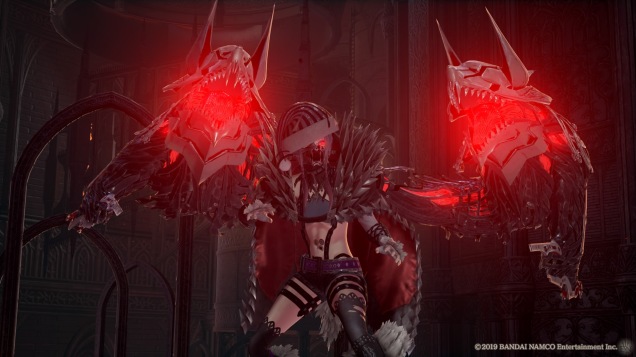 Unable to wake up, trapped in a violent nightmare, with her body slowly morphing into a shapeless monster, Elaiza soul was at the edge of a breakdown. Then something happened. The Revenants realised of her powers, and they asked for her help against the Lost. The Revenants promised to stop their uncontrolled feeding on the other souls trapped in this nightmare, because they were also the victims of the Lost, which were sitting at the top of this nightmarish food chain. Elaiza found a purpose in this nightmare, but she was still unable to wake up. She continued to fight the Lost, defeating monsters after monster, while her body changed and her powers grew.
Will she ever be able to wake up from this nightmare? Or will her body corrupt into a nightmare before?
Follow Dark RPGs on WordPress.com