As the name suggests, Blasphemous is a horror metroidvania that really uses inspiration from religious art to create the unique world of Cvstodia. In this horrific land, the Miracle is a sort of eldritch energy that grants wishes to the believers, but twisting their desires and martyrdom in a disturbing and unexpected way. In this fictional land where religion and fanaticism are founding elements, existing classic and religious art is the most important reference. Dark fantasy elements are combined with the aesthetic and extremes of Catholicism, shaping a unique world full of interesting places and memorable characters. Not only famous paintings of saints and religious figures are partially reshaped into disturbing creatures, but also symbolism and religious iconic elements are used to create nightmarish entities. Between the many twisted creatures and characters inhabiting the world of Cvstodia, in the following article I selected the most striking references to Catholic art in terms of paintings, sculptures, and architectures.

One of the strongest and most evident connections with religious art is the boss called Ten Piedad. Probably the first boss to be faced in the game, the creature immediately strikes for the resemblance with the iconic Michelangelo’s statue the Pietà. If the statue of the Virgin Mary is identical to the real one, Jesus, by contrast, is far more different, because the boss itself is lying in the arms of the statue. The reference is familiar but disturbing at the same time, since the hideous and disfigured monster is still posing at the beginning of the fight as the statue of Jesus. The name of the boss is also not hiding the reference, since Piedad is the Spanish name for Pity, same as Pietà in Italian. Other than a striking artistic reference, the boss also works reverting the religious symbolism, transforming the body of Jesus ready for resurrection, in a disturbing figure. The monster was once a man, who just wanted to sleep in the arms of the statue of Mary. During his restless sleep, the Miracle morphed his body in a disfigured monster, imprisoning his sleeping mind in this hideous monster. This concept could be a symbolism of “what if the resurrection of Jesus went wrong?”. A creepy what-if, imagining how after sleeping, or being dead, the man-that-once-was would instead come back as an evil version of himself.

The martyrs are a common topic in many religious paintings, often adorning the colourful windows inside churches with images of their ultimate suffering. San Sebastiano (Saint Sebastian) is probably one of the most famous martyrs, at least for the strong and iconic image of his death. The Christian man was executed by Romans after they discovered his true religion and, after being bound to a stake, he was shot with dozens of arrows. The image of his martyrdom was portrayed many times by famous painters, becoming an iconic symbol of unjust sufferance. In Blasphemous’s world, the character of Gemino is a direct visual reference to the martyrdom of San Sebastiano. He is imprisoned inside a metal statue, bound to an olive tree, exposed to extreme coldness, and pierced by multiple arrows, resembling in the pose every painting of San Sebastiano. Gemino is also a martyr, suffering this terrible torture until he will become part of the tree itself. Gemino’s only treasure is a small olive, the last gift that nature offered him before starting his torment, a small symbol that he will treasure in his hand till it will freeze. 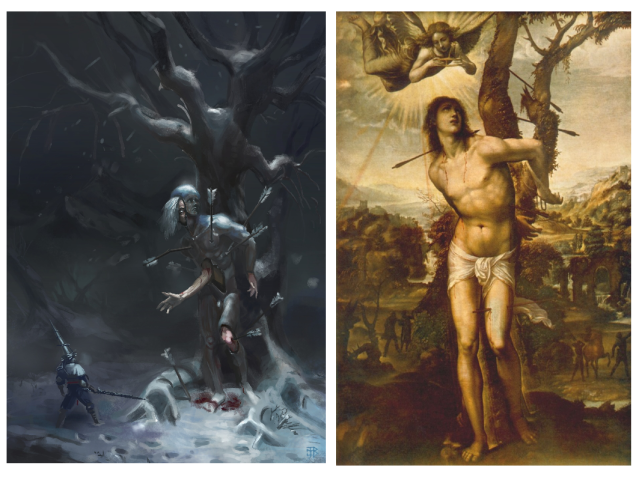 Between countless artistic references to Spanish traditions or masterpieces such as the works of Goya or Velazquez, it is difficult to decide which reference is more interesting. But focusing on the religious more than on the artistic side, Cherubs, for example, are a very common concept used in many characters and creatures of Blasphemous. Sometimes, the reference is used quite literally, for example in the collectables, which in this case are flying childish angels imprisoned in cages.

Even if there are several references to Cherubs, especially to the way they are portrayed in religious art, the case of the Headless Chamberlain is probably the most emblematic. The nightmarish creature has the body of a man but missing the head, going around with a pillow with on top the head of a Cherub. To highlight its creepiness, the creature has also a bag full of disembodied heads. The Headless Chamberlain attacks by throwing the flying head, which can move on its own while hunting the intruders. In this specific case, the Headless Chamberlain is directly inspired by the painting The Immaculate Conception (1662), as stated by the creators of Blasphemous in the official artbook (NDR which is really gorgeous, if you didn’t buy it). In the painting, several angelic heads are flying in the top corners of the painting, harmless and angelic in this case, but used as the core element to create the nightmarish Headless Chamberlain.

Child-like angelic faces are common in many other designs in Blasphemous universe. The lord of all the Cherubs, called Jocinero, is a particularly interesting and disturbing character, but I will talk about him in a future article. The embodiment of paedophobia, or the fear of children, is clearly Exposito, the most iconic and disturbing boss of Blasphemous. The creature is a gargantuan baby with the strength of dozens of men, resembling a giant Cherub. However, Exposito is also very similar to Baby Jesus, especially due to the golden crown of thorns adorning is head. I will not speak more about Exposito since I already covered its design and symbolism in a previous article, available HERE.

The artistic religious references inside Blasphemous are not only limited to paintings but are also connected to more architectural details. Churches are specifically implemented inside the design of several enemies, a combination of flesh and architecture, connecting the sacred with the profane. Some enemies simply use as main weapon church elements, such as giant crucifixes or bells. The Shield Maiden is a small exception and, even if it uses religious architecture as weapons, the design of the weapons is more interesting and elaborated, integrating complex decorative elements. The most interesting detail is that while using a golden decorative element as a shield, the creature removed the head of the statue to wear it as helm. 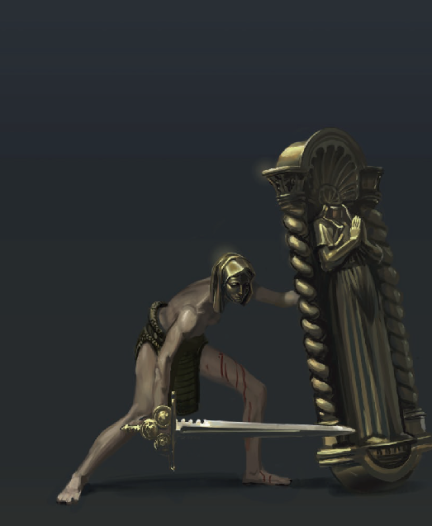 On the other hand, other creatures have architectural elements directly embodied in their design. Let’s talk for example of the Blazing Icon. The female figure is covered with red velvet, looking like an elaborate walking curtain. The most interesting detail is the cage-like structure around her head, which uniquely defines the design. The structure is clearly inspired by architectural elements inside churches, for example resembling the famous baldachin in the middle of St. Peter’s Basilica in Vatican City. The baldachin is positioned in the middle of the church, marking the entrance to the supposed tomb of St. Peter. The head-ornament creates a figure that is practically a living and walking element of a church. The baldachin-like cage is probably quite heavy, and this is reflected in the Blazing Icon, which is slowly walking around oppressed by such weight.

Another enemy brings the concept of religious architecture integrated into the design even a step further. The creature is not present in the game, at least for the moment, but its beautiful concept is available in the artbook. The heavy knight shows an incredibly detailed and complex design, practically looking like a weaponized chapel. A tower-like tabernacle, which is used to store the images of various saints, would be probably used as the main weapon of the knight, like a sort of improvised holy mace. The body itself works as a reliquary, with the probable head of a saint exposed behind glass. This is a very common phenomenon in several churches, where body-parts of saints are exhibited as religious emblems. The knight is the quintessence of religious architecture integrated into the design, a walking chapel ready to smash down the infidels.

Still, there could be a lot to talk about artistic and religious elements inside characters and monsters of Blasphemous. For example, Sepulcro Errante is a golem-like creature bringing on its back the tomb of a Spanish king, while the iconic creature Amargura could be almost considered as a living altar. But I think that the creatures analysed in the article are the most iconic and direct integration of catholic paintings and architectures into the grim world of Blasphemous.